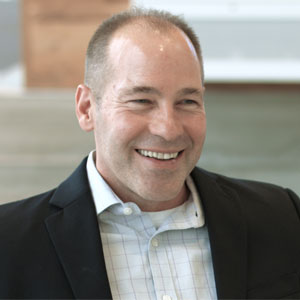 A smart city is efficient and convenient. A safe city, on the other hand, is a necessity.

Imagine this scenario: A gunshot rings out in a high-crime area of a large city. A victim lies on the sidewalk. Instantaneously, a gunshot detector embedded in a nearby streetlamp detects the gun shot and alerts the nearest crime center. The streetlamp automatically brightens and the surveillance camera captures video footage of the incident. The police and emergency medical personnel responding to the crime scene are equipped with this information through secure, reliable networks to their mobile units.

The RTCC serves as an aggregation point for the video feeds and crime scene evidence, and has access to critical criminal records. The crime information is matched against fingerprint, facial recognition, and social media intelligence leading to actionable intelligence. What is the result? The perpetrators are captured and brought to justice faster than ever before.

The benefits of Safe City programs include not only improved crime-fighting but also safer conditions for citizens and first responders. For example, a police officer on a house call could be informed of a dangerous individual in the vicinity or recent drug activity.

Safe City technologies are beginning to use drones to investigate burning buildings, greatly decreasing firefighter fatalities. Armed with multiple capabilities, such as the ability to enter confined spaces and transmit video, drones can be a valuable tool in any Safe City initiative. Drones can be equipped to detect the presence of chemical substances, such as a gas leak, or provide aerial surveillance in dangerous or remote areas, in situations ranging from brush fires to lost or injured citizens. 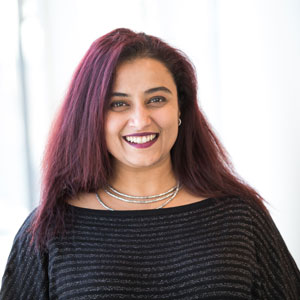 FIGURING OUT THE SAFE CITY PUZZLE

Smart cities are typically associated with smart electric / water meters, smart streetlights and intelligent transportation systems, while its application to public safety often takes a back seat. Cities, counties and communities eager to implement smart city solutions must begin to include public safety initiatives within their planning process. Responses to Black & Veatch’s 2018 Smart Cities & Utilities Strategic Directions Report indicate that although stakeholders are deploying individual Safe City initiatives, there is clearly an opportunity for a system integrator to deliver an end-to-end solution that delivers compounded benefits. 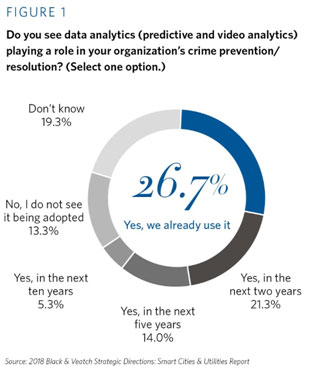 Currently, data analytics are often used to identify high-crime locations. The next step is to deploy video cameras at these locations to deter and further prevent crimes from occurring. Surveillance video alone will serve as an invaluable tool in solving crimes.

According to survey results, data, social media integration and video feeds are the most popular technologies in use at RTCC. Over a third (36 percent) of survey respondents have already adopted integrated voice, data and video as elements of a public safety communications system, with another 29 percent planning to adopt these elements (Figure 2). More than half (54 percent) said they foresee adoption within the next two years. 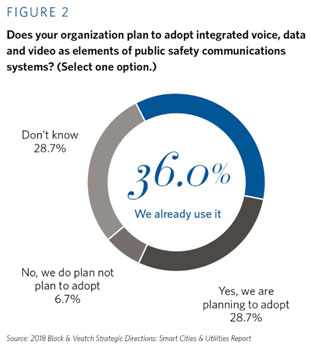 When asked what additional technologies were needed, respondents listed data analytics as their top response, followed by video surveillance and backhaul connectivity.

Funding is a key issue when it comes to Safe Cities. Today, the largest cities armed with the largest budgets, namely New York and Los Angeles, are leading the way in public safety. These metropolises already have substantial video surveillance programs, along with sophisticated, state-of-the-art crime centers and/or emergency operations centers that coordinate first responder operations.

When it comes to funding, half of municipalities surveyed state that they rely on federal grants as their primary source of funding, followed closely by local taxes. 21 percent said they obtain funding through public-private partnerships (Figure 3). 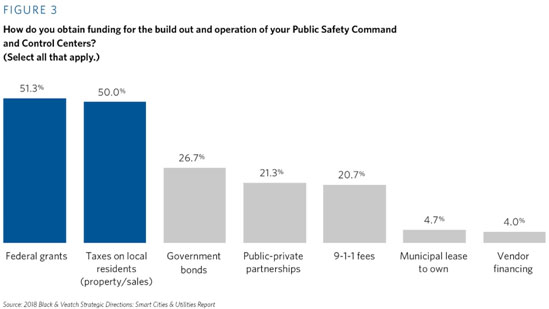 Once implemented, Safe City programs are important, not only in preventing and solving crime, but in working quietly behind the scenes to keep communities safe, which universally improves quality of life for all citizens.